Who am I? Why this Blog?

In August 2016 I completed my Doctor of Law and Policy (LP.D) degree at Northeastern University in Boston. I received my doctoral hood in September 2016. I was a member in the 8th Cohort of that unique program.

I set up this blog at the suggestion of one of the LP.D program leaders whom I truly respect, Professor Neenah Estrella-Luna, Ph.D. Early in the LP.D program she strongly recommended that each Cohort member track their progress and stand up to the scrutiny of peers, just as we do when we publish or present papers.

At least that was my initial goal…

In real life, I’m a practicing telecom law attorney licensed in California and New Mexico, as well as a radio frequency engineer. My law firm has five attorneys, four staff, and two dogs working in offices in Los Angeles, San Diego, Seattle, and in our covert office on a Southwest Airlines jet (minus the dogs).

I have earned the following academic degrees:

Having completed my Doctor of Law and Policy degree, just for fun I might go after a few more professional licenses.

My current goal is to become licensed as a Real Estate Broker in California. Done that!

I am personally accountable for my education and the work I put in to that education. Because of that, I’ve decided to be transparent about my grades, whether good or bad (but better good than bad).

Dr. Sandy Bond’s Research Taken as Gospel by Some 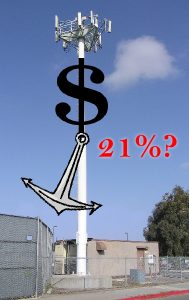 It’s always an amusing surprise to me when I see Dr. Sandy Bond’s 2007 research on cell towers and property values quoted in public hearings.  It happened again a few days ago during a hearing in which I participated, when a resident told the government leaders that cell towers lower property values by 21% (not 20%; not 22%, but 21%).

Here’s the citation to Bond’s 2007 report in case you’d like to read the source materials (most people don’t):

I find it fascinating that the people who cite the number have no idea about what’s in the report, or that Dr. Bond’s research methodology has been roundly criticized by Filippova and Rehm (2011).

Go ahead and read both documents, and then make an informed decision as to whether you would want to be associated with the 21% number.  I certainly don’t.

Finally, in about 90 days I’ll be publishing my findings on hedonic price modeling to assess the dis-amenity value of a cell site near a home, this time a bit closer to the U.S., specifically in Calabasas, California.  My research discloses that hedonic price modeling–if it ever had a valid place in research–is no longer any sort of useful tool in this line of research for reasons discussed in my thesis that could not have been known to Bond, Filippova, or Rehm, or to the few researchers to who followed down the same rabbit hole.

Dr. Kramer Secret Site for his students (don't tell anyone!)